From a Memorandum of Understanding to the European Awareness System: seven years of regional coordination in Continental Europe. 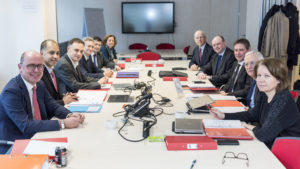 Eirgrid and SONI, the two grid operators on the island of Ireland have joined and become a shareholder in Coreso, the coordinating body for regional security. They join their European counterparts from Belgium (Elia), France (RTE), the UK (National Grid), Italy (Terna), Germany (50Hertz), Portugal (REN) and Spain (REE).

After years of hard work and preparation CWE Flow-Based Market Coupling went live successfully. On 19th May the operational process including the Flow-Based capacity calculation did start for the first delivery day on 21st May. CORESO is a basic element in the operation process by providing the merged grid models, coordinating Remedial Actions and operating the Flow-Based Common System in inter-RSCI cooperation.

The D-2 capacity calculation process on the Italian border started on Monday. First capacity have been calculated for 2 timestamps each day (3h30 and 10h30). As a reminder this is the first step (no results will be published to the regulator and the market player). The process will then grow-up with the final goal to have for June 2014 the allocation of 24 capacities based on the calculation of 2 timestamps.

The European Awareness System is established: technical implementation of the EAS (ENTSO-E Awareness System) at Coreso (read access via the RTE connection to EAS) is completed. Coreso can now also view the most important real-time parameters for the European electricity system.

IDCF process implemented at Coreso. This new process is developed and rolled out by Coreso and TSC (both of them regional security coordination platforms). In all, 17 TSOs cooperate by providing the necessary input data on an hourly basis. The intraday studies are now improved owing to the automatic hourly update of the Day Ahead files; Coreso provides two system studies for the morning and evening peaks in demand.

Renewables data provision: Along with a renewable energy data provider, Coreso now has a view of both wind and solar generation forecasts across all of Continental Europe and Great Britain.

Launch of the Flow Based Process. TSOs in the CWE area launch the flow-based internal trial run. Coreso starts performing the shared tasks involved in this trial.

Day Ahead for 50Hertz and Terna: Coreso starts providing coordination services to Terna and 50Hertz for day-ahead analyses. It is the result of six months of preparations during which many Terna, 50Hertz and Coreso employees helped to develop processes, update procedures and tools, and trained Coreso operators.

Intraday activities: Following the conclusion of a cooperation MoU between Regional Security Coordination Initiatives, which was signed by 17 TSOs in March 2011, TSOs provide recurrent input data. This is achieved thanks to Convergence Supervisor (Coreso’s merging tool); the results are highly satisfactory and generate practically real-time analyses based on snapshots from five TSOs.

Coreso provides its shareholders with security analyses of the Italian grid via the PubliCoreso tool, which contains the contingency list of all lines in France, Belgium, the Netherlands, Germany and Italy. Coreso subsequently includes forecasted flows on the Terna and 50Hertz tie lines in the day-ahead report tables.

Regional Market Coupling for the CWE area goes live. Coreso plays a role as the hosting entity of the TSO Common System tool.

Coreso starts operating 24/7 with experts hired from participating TSOs at its Brussels-based centralised coordination centre. Coreso provides virtually real-time security analyses in addition to day-ahead forecasts. Studies are completed based on so-called real-time ’snapshots’ supplied by TSOs. Computational models provide results every 15 minutes that are used by expert engineers to assess the security of the European electricity system. See the relevant press release.

A Memorandum of Understanding (MoU) is signed by the German, Belgian, French, Luxembourg and Dutch governments and the actors involved (TSOs, power exchanges, regulators, market players) in support of the regional CWE initiative. The Memorandum of Understanding aims to introduce market coupling between the CWE electricity markets and improve coordination between TSOs to ensure security of supply in Europe.

Following serious electrical power disruption in Europe 15 million people are left without power due to a lack of coordination between Transmission System Operators (TSOs) in the Central Western Europe (CWE) area. The European Commission, together with TSOs, starts looking into ways to improve coordination between TSOs to guarantee the safe operation of the interconnected system with a view to maintaining security of supply.